Ashina Elite - Jinsuke Saze (葦名流・佐瀬甚助, School of Ashina - Saze Jinsuke) is a Mini-Boss in Sekiro: Shadows Die Twice. This Complete Ashina Alite - Jinsuke Saze Mini-Boss Guide gives you strategies on how to beat Jinsuke Saze easily, as well as tips, tricks and lore notes. Mini-Bosses are special Enemies that are uniquely named, and have 2 or more health bars. This means they require at least 2 Deathblows in order to kill, they are generally much more difficult than normal enemies, and they drop some of the best loot in the game.

Where to find Ashina Elite - Jinsuke Saze in Sekiro?

What do you get from defeating Ashina Elite - Jinsuke Saze in Sekiro?

Ashina Elite - Jinusuke Saze is a straightforward, but punishing mini-boss that relies on quick and devastating attacks to overwhelm you very quickly. His most used Ashina Slice attack deals heavy posture and vitality damage through a block and comes out extremely fast making the deflect or dodge timing very unforgiving.

Ashina Elite - Jinusuke Saze uses his Ashina Slice attack very frequently; as such the most straightforward way to approach this encounter is to properly dodge or deflect this attack and counter. Stay within striking distance and wait for him to sheathe his sword. When you see a flash of light appear from the handle either dodge to your right toward him, or attempt to deflect his strikes. Deflecting his strikes deals massive posture damage and should be done if you are able to do so safely. Dodging is the safer choice and will set you up for 1-2 counterattacks. When his sword is not sheathed he will attempt either a combo or perilous attack and you should react accordingly to what he does.

Whirlwind spam strategy - Jinsuke does heavy and quick damage but he has low health. Run towards him and start attacking directly with whirlwind slash. Keep spamming whirlwind while holding the left analog stick to the left (he'll miss his attacks 50%-75%) even if he manages to get some hits on you. If the boss gets multiple hits (or just a hit for low vitality players) on you, dodge backwards and heal - use firecracker afterwards, dash or chase slice and start whirlwind slash spam again. Use Ako's sugar if you want maximum attack power however Ungo's sugar is recommended so you don't have to heal as much (or get instant death).

Chasing Slice Combo - Jinsuke will deflect your shuriken but not chasing slice. This is a chance to attack, then jump over his perilous attack and step on his head to do great posture damage.

Poison Sabimaru - The Sabimaru is this boss' weakness. After dodging one of his attacks, unleash a flurry of Sabimaru attacks. He will be poisoned even if he guards. Avoid taking hits and let the poison eat away at him, then move in for a deathblow.

Flame Vent - Use oil and use the small window after he uses Ashina Slice to hit him with the Flame Vent which takes out a good chunk of his health while also leaving him temporarily vulnerable.

Loaded Spear - Loaded Spear can be used to cheese this boss' AI. Activating the Spear at close to max range, with his sword sheathed, will cause him start his draw attack as sekiro comes into range. This interrupts his attack, dealing a large amount of health and posture damage, especially with Chasing Slice. He will the then respond with a sweeping perilous attack which can easily be stomped. Run away, rinse and repeat.

Hit and Run Strategy - If you keep your distance and dash close, running clockwise around him, you will always dodge his Ashina Slice. Use the opportunity to sneak in a few attacks, and disengage. Repeat this hit and run tactic until victorious. 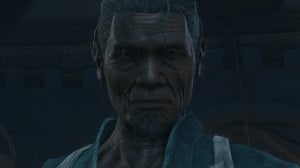 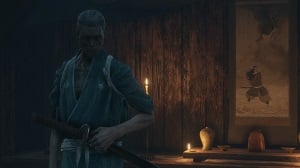 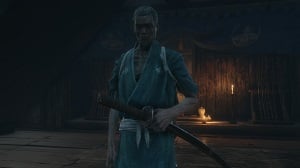 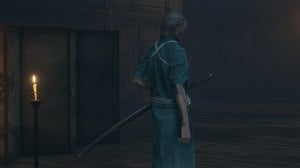 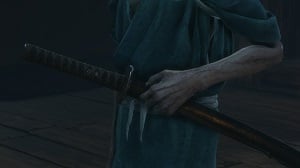 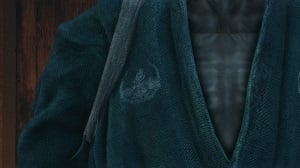 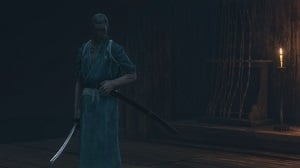