Basket Wearer Shosuke (籠かぶりの正助, Basket-Head Shōsuke) is an NPC in Sekiro: Shadows Die Twice. He is a frightened man wearing a basket on his head.

If the player chooses to Greet him: Hey.

Thank goodness...! You ARE an honorable person. (Sobs)

Is there...something you want to ask?

Look, sorry but... If you have questions I'll have to answer with this basket on my head."

If the player chooses the "Ask about the village" prompt: What is wrong with this village?

Before I knew it... everyone had gone insane!

The head priest sometimes treats us to sake.

But you know... when you drink sake, you get thirsty.

The sake cask runs dry in no time.

So everyone has no choice but to drink the water in the ponds and rivers.

But, the more you drink, the thirstier you get... Ah... You get thirstier and thirstier, can't ever drink enough...

All I know is, they all fear fire.

For a while, I too was in the same daze. And I felt the fear too.

An unquenchable fire... Even now, the thought of it gives me chills!

The hunter Inuhiko started burning pine resin and locked himself in his house.

His pine resin burns for a long time... It's a real nuisance.

Inuhiko is the village outcast.

He likes eating wild animal meat and the sort... That's why the head priest doesn't give him any sake.

Sekiro Speaking: Where is Inuhiko's house?

Oh, on the other side of the pond. Inuhiko's is the last house on the path.

If the player chooses the "Ask about the village priest" prompt: Tell me about the priest.

He's the most important person in the entire village.

You can find him in the shrine, all the way up the riverside near the water's source.

Got to go, huh? I'll be here, hiding in this basket.

After acquiring the Pine Resin Ember: 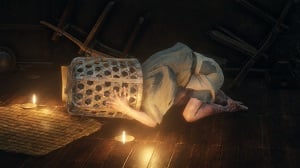 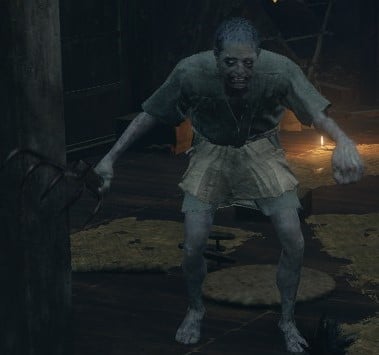