Corrupted Monk (real name Yao) (破戒僧, Depraved Monk)  is a Boss in Sekiro: Shadows Die Twice. This Complete Corrupted Monk Boss Guide gives you strategies on how to beat the Corrupted Monk easily, as well as tips, tricks and lore notes. Bosses like the Corrupted Monk are special, dangerous Enemies that feature a special display on-screen when defeated, such as "Immortality Severed" or "Shinobi Execution".

The Corrupted Monk can be fought twice throughout the game: once with just one health bar and then again with three depending on the chosen ending.

Where to find the Corrupted Monk in Sekiro?

What do you get from defeating the Corrupted Monk in Sekiro?

The player must fight the single health bar illusion version in Mibu Village of the Ashina Depths to collect the Shelter Stone in order to proceed through the story. She is not an Apparition type enemy, so Divine Confetti will not deal extra damage to her however she is an illusion so, Snap Seed, Fistful of Ash and/or Lazulite Axe can be used to briefly stun her; with that in mind, it is possible to perform stunlocks and prevent any counter attack. If the player has the Phantom Kunai with swarming upgrade, this does a lot of damage. With the tanto to provide another 15 emblems, the Monk can be brought to about 25% health with Phantom Kunai alone. It may still be worth trying without the swarming upgrade. The Snap Seeds can also be used to significantly lower the Monk's health.

In this fight, the Corrupted Monk has a lot of health and takes very little Posture damage. Because of this, the only effective way to defeat her is to chip away her health by attacking when she is wide open, usually after her many swipe attacks. She has two perilous attacks, the sweep can be jumped, and a thrust that can be Mikiri Countered. Also, the Monk tends to use single big moves when Wolf is at mid range, jumping in for one air hit and two ground hits (let the landing cancel the air attack lag), then jumping away to mid range works well.

One of her most dangerous attacks is a upwards slash that goes through Sekiro's defenses, meaning it cannot be blocked; however it can be deflected, though the timing is very precise. Another attack that should be avoided is a continuous spinning attack with the Naginata, which can quickly exhaust Sekiro's Posture gauge; since the area where she is fought is wide open, the player can run away when she performs this attack. She tends to perform this attack when away from the player, and has a higher tendency to do so if the player uses any consumable (such as the Healing Gourd).

The player will receive the Memory: Corrupted Monk and Mibu Breathing Technique Latent Skill upon defeating this boss.

(Works in earlier versions, need to confirm on v1.03) On top of the stairs on the boss stage, right besides the stone door, there are 2 monoliths (one on each side). Get the monk close to one of the monoliths with her back facing it. Use a firecracker to stun/Bait her into a jump attack and run towards the monolith. Jump towards the monolith and use the monolith to double jump backwards towards the monk. Lock on mid air and the aerial deathblow red circle should appear. If done right, you can instantly down her from full health to 0.

(Works with v1.04) Using the same strategy above, but instead of jumping on the monolith approach very close to the monk from behind and using Aged Feather Mist Raven combined with Contact Medicine to teleport upwards, the deathblow red circle should then appear. It might be necessary to try multiple times from very close up to get the right angle, she should not be alerted if you fail the first time.

The True Corrupted Monk will be fought at the entrance to the Fountainhead Palace. She must be defeated in order to proceed further into the palace. The boss will have 3 health bars that must be removed to be defeated.

This phase is very similar to her illusion fight at Mibu Village, however, she takes significantly more Posture damage, which makes deflecting far more effective. She also has less health, considering there are 3 health bars. The same strategy of  the Mibu Village fight can be employed here, as she has the same attacks. She tends to use her perilous attacks more often, though; additionally, she doesn't use her whirlwind attack until the third phase.

In this phase and all subsequent ones, she is susceptible to the Shinobi Firecracker, which can be used to briefly stun her; however, this is best used on the third phase.

At the start of this phase, the Corrupted Monk will disappear, and the area will be enveloped by mist. She then proceeds to summon three shadow illusions of herself to each attack the player three times. The shadows disappear in between attacks, making lock-on difficult. The shadows do not need to be defeated in order to the illusion to be dispelled; the Monk will eventually end the illusion  and return to fight the player. However, she may cast the illusion again if the player is unable to deal the second Deathblow swiftly. If you are having trouble avoiding the shadows, killing yourself with a Bite Down pill will instantly dispel them.

It is possible to perform an aerial Deathblow on the Corrupted Monk as she casts or dispels the illusion by positioning Sekiro on the tallest tree near the temple and jumping down when the Corrupted Monk appears in a squatted over position. Doing this will immediately end second phase. This is best done the moment after the player Deathblows her in the first phase, by grappling the nearest tree branch and proceed to grapple to highest branch, located on the left side of the bridge (with your back to the Idol). From there, look down to see the true Monk and standing in the middle of the bridge; if so, plunge attack her from here. This branch is also extremely useful for dodging the spirits she summons during her second phase, as only the first one seems to be able to hit you there, and not often.

The rest of her moveset remains the same as the first phase; so employ the same tactics.

In this phase, a demon centipede will erupt from her body through her neck. She retains most of the moveset from the first phase, but is far more aggressive than before; on the other hand some of her attacks are a bit more telegraphed and predictable. In this phase she tends to use overhead attacks as a finishing move.

Notably, she gains a new perilous attack where the demon centipede spews toxic goo in front of her, which can inflict Terror. It is advised to sidestep or use the jump kick when she uses this and retaliate, as this attack has a quite lengthy ending lag. Another attack involving the centipede is a toxic cloud; however this is not a perilous attack.

In this phase she uses the whirlwind attack seen in her fight at Mibu Village. Simply run away when she starts spinning.

After depleting her third bar, make sure to perform both Deathblows when prompted to finish her for good. The player will receive the Memory: True Monk and the Dragon's Tally Board Key Item upon defeating this boss.

As of update 1.03 you cannot deathblow the Corrupted Monk at the beginning of the fight. There's an extremely easy way to deal with the boss by exploiting its AI. If the player grapples the high tree behind the Corrupted Monk, a Deathblow can be used on her, essentially allowing to skip the second phase. This can be done as soon as the second phase starts, as she will disappear to summon her shadow illusions and return to the same starting point when dispelling it.

Another way of  "cheese" her is to attract her to the last tree of the right side of the stage (near to wall) in the start of the battle, basically when she appears in the stage, go back to the tree on your left (on your right if looking where you came from) and walk in the corner in the right side of the tree as if you were going to fall off the cliff (but you dont fall unless you jump). Do this until she starts attacking you, then jump to the cliff aiming the wall where you jumped, after that, wall-jump the wall to force her to perform the third hit of the combo and let the wolf fall. If done correctly, after you respawn it will be buggy at the edge of the precipice, and you can safely attack her.

Another of achieve the same result is jumping to the cliff and land on the another side of the tree, but in the most of the time the bug will not happen.

Immediately when the phase 2 starts, Fistful of Ash or Shinobi Firecracker and always don't let her teleport (recommended to use Ako's Sugar and/or Divine Confetti).

In the third phase, most of the time she will fall from the cliff and die. But he can also bug and can't die, and it can also happen to she still be bugged on the corner. 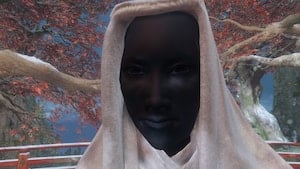