Dilapidated Temple is a special Location in Sekiro: Shadows Die Twice. Located within the wider area of "Ashina Outskirts", it is a ruined Buddhist Temple attended by a Buddhist Master known as The Sculptor, that also acts as a safe reprieve from the waging war and desolation that envelops the land. The area acts as a hub for Sekiro and several other Characters.

NPCs in the area

A cutscene plays that shows the Sculptor carving Buddha statues, and the Wolf awakening from rest, only to find his lost arm replaced with a strange prosthetic. This is the Shinobi Prosthetic, which triggers the trophy of the same name.

Important: This location is not named prominently on the screen, but for the purposes of this wiki we have distinguished it as a unique location. It is technically just a Sculptor's Idol within Ashina Outskirts.

Talk to the Sculptor

Talk to the Sculptor and he will call you Wolf, and tell you to do as you like since he must continue to carve the Buddha. You can Ask how you got here, and ask about your new left arm.

"Why am I here" has him tell you he just dragged you back because he wouldn't let you be eaten by dogs. He also informs you it has been a long time since you were taken, but that your master (Kuro) lives, and is a prisoner in Ashina Castle who wants to use his bloodline.

"This left arm, what did you do to me?" triggers an explanation of the Shinobi Prosthetic, which is not just a replacement of the arm but special for using Shinobi Tools, which you can bring back to the Sculptor and he will have them fitted for you. It would seem the prosthetic belonged to the sculptor, who is gifting it to you because he has no use for it as all he must do is carve statues.

"What did you mean you said they'll make use of the bloodline of the Divine Heir" triggers an explanation of "The Dragon Heritage" which is a special blood your master has and the reason of his targeting. Sekiro's body is acting strange, likely due to this.

He further informs you that there are other strange people making it to the temple, and to find a specific one to the left of the gate.

If you approach the bronze color Buddha nearby, the Sculptor will credit its creation to a "true" sculptor, and say that its purpose is the facing of the inner problems - memories, etc.

Emma will reveal she is a doctor working for an unnamed master. She will decline to give the master's name for their safety but will say that she was tasked with assisting you. You can show her your Healing Gourd, which she claims to have created herself, for Kuro, the Divine Heir. She will say that the water within it refreshes by itself, and to bring her Gourd Seeds and she will increase the volume of the medicinal waters.

If you talk to her, she has a request: to show her your face, and asks about the white mark that you have - she theorizes it might be from your relationship with the Dragon Heritage, or a symptom of it.

Go right from the Sculptor's Idol, going up a snowy path to a clearing and talk to the NPC sitting by a small shrine with an offering box. The Offering Box is a special system to recover lost items if something was lost during gameplay it will appear in the box. When the box is illuminated, it means an item has found its way inside. Items can be obtained by inspecting the box and offering money.

Talk to Hanbei the Undying and he will engage you in combat. When you defeat him, he will revive. Talking to him again will have him praise your sword skills, and explain he is "infected" or "undying" so he's just there since he can’t die. He offers to be your training partner for your skills in order for you to complete your mission. Accept his offer and the option for "Training" and "Talk" will pop up. Pick to Train if you want to fight him, or "talk". The "Talk" option triggers a conversation about those in the temple being those who have nowhere to go, and he brings your attention to the Offering Box. (He can be killed with Mortal Blade, drops Hidden Tooth) 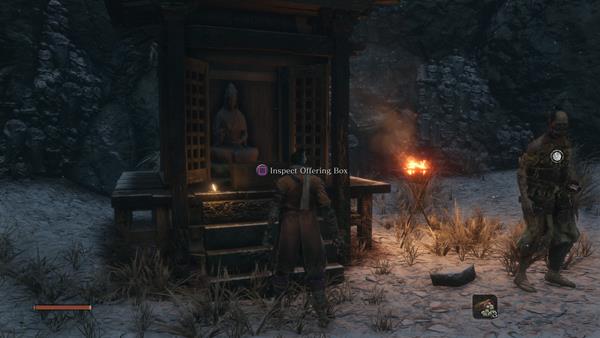 Players will find the Dilapidated Temple to act as the Firelink Shrine or Hunter's Dream might have done in other FromSoftware games. This is a safe haven for Sekiro and a hub for several NPCs and Characters to interact. Initially, players will only find Sculptor, Hanbei the Undying and Emma, but as the game progresses and they find more Characters, they will see some Merchants and other NPCs visit the temple.

Exit the gate and a tutorial for the Grappling Hook will appear - use L2 to grapple onto a branch and proceed forward. This path connects you to Ashina Outskirts.

Behind the main Temple, there is a 1x Light Coin Purse.

A cave-like path also leads to a Shinobi Door that is locked until unlocked from the other side.

Services in the Dilapidated Temple

As with other games, the Hub of Sekiro's world provides several services that players can count on for their character advancement.

Areas Accessible From The Temple

The Dilapidated Temple links to Ashina Outskirts. Once you defeat Genichiro Ashina, it also links to Kuro's room in Ashina Castle via a Shinobi shortcut. This shortcut will again be closed during Ashina Castle's first and second invasions.

Information on how to access each area, as well as maps and a detailed Walkthrough, are available under the links. 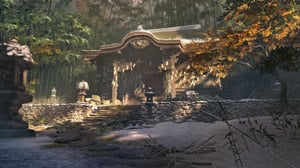