Divine Dragon（桜竜, Sakura Dragon） is a Boss in Sekiro: Shadows Die Twice. This Complete Divine Dragon Boss Guide gives you strategies on how to beat the Divine Dragon easily, as well as tips, tricks and lore notes. Bosses like the Divine Dragon are special, dangerous Enemies that feature a special display on-screen when defeated, such as "Immortality Severed" or "Shinobi Execution". You will need to perform multiple Deathblows on them in order to defeat them, and filling their Posture Gauge is the only way to accomplish this. However, decreasing their health will make their Posture Gauge deplete slower and build up faster, assisting you in accomplishing this feat.

Where to find the Divine Dragon in Sekiro?

What do you get from defeating the Divine Dragon in Sekiro?

Phase 1 - Old Dragons of the Tree

In the first phase the player doesn't fight the Divine Dragon directly, but the Old Dragons of the Tree (白木の翁たち, White-wooden Old Men) which is a very simple fight. As the enemies move very slowly and do not charge directly at the player.

Avoid direct contact with the enemies, as they cough a poisonous gas. Simply stay away until the trees appear and grapple to stand on top of them. Then using a plunge attack Deathblow on one of the many enemies, preferably aiming at one in the middle of the pack, as the Deathblow causes Sekiro to spin the victim around, dealing massive damage to the others nearby. Repeat this until all enemies are dead.

In order to damage the Divine Dragon, the player needs to run towards the trees that are charged with electricity (this is easy to spot as they will have a yellowish sparkle on them) and grapple up to them. Once done, Sekiro will be vaulted very high in to the air; when this happens press the attack button (R1/RB/LMB) to hit the dragon with spear of lightning. Repeat this process, being careful not to grab the lightning when he blows Sekiro backwards, otherwise the damage will likely be fatal.

The Divine Dragon has only two attacks: an overhead slam that can be easily avoided by running to either side or blocked; or a perilous ground-level sweep which you need to jump over. Both attacks are long range as they emit shockwaves that reach high distances. Holding down the dodge button to run is the easiest way to avoid its damage, and jumping when it uses the sweep attack.

Once its HP gauge is near empty, the trees will vanish, and the player will need to "survive" until they reappear, after about 60 seconds. Keep a safe distance, deflecting, jumping, running and generally avoiding all of the Divine Dragon's agressive attacks until a lightning tree appears again, and then strike him one final time; Sekiro will be launched directly over him, where the player can approach to finish it off with a Deathblow.

Upon defeating the boss, the writing "GRACIOUS GIFT OF TEARS" will appear on the screen. (Gracious Gift of Tear also being the true name of the crimson Mortal Blade) 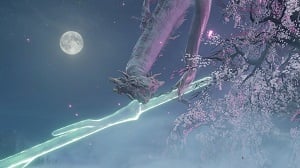