General Tenzen Yamauchi (侍大将・山内典膳, Samurai General - Yamauchi Tenzen) is a Mini-Boss in Sekiro: Shadows Die Twice. This Complete General Tenzen Yamauchi Mini-Boss Guide gives you strategies on how to beat General Tenzen easily, as well as tips, tricks and lore notes. Mini-Bosses are special Enemies that are uniquely named, and have 2 or more health bars. This means they require at least 2 Deathblows in order to kill, they are generally much more difficult than normal enemies, and they drop some of the best loot in the game.

Where to find General Tenzen Yamauchi in Sekiro?

What do you get from defeating General Tenzen Yamauchi in Sekiro?

"General Tenzen Yamauchi of the Ashina clan demands a keen eye" - This general is clad in heavy samurai armor, with a horned black helmet and red accented armor. He uses a Nodachi as his main weapon.

The banner displayed in Tenzen's arena, as well as elsewhere in the game, reads "有死之榮無生之辱". This is a line from the Wuzi (呉子兵法), an ancient Chinese text on military strategy. The phrase can be translated as "In the instant of death there is glory, in an empty life (i.e. perpetuating one's life merely out of a fear of death) there is only shame." The text presented in-game is altered slightly from the original in the Wuzi, "有死而榮無生而辱". A more literal translation of the Wuzi's version, "The instant of death [is realized], yet glory is attained. Empty life [is preserved], yet shame falls upon you."

Start the encounter by sneaking through the grass to kill the first lesser enemy.Throw a shuriken at the enemy looking in your direction to make him come to you. Run towards the next enemy and take him out. Head towards the left to de-aggro the mobs while we reposition ourselves. Climb the tree to reach the building with the lone short enemy and take him out. Next jump onto the last several mobs and eliminate them. The one with the gun is easy to get rid of before focusing on the sword wielding mobs. This will leave you and the boss alone. Sneak back to where you killed the first enemy and watch the boss movement. Once he turns his back to you, sneak walk towards him to get a free deathblow in. This will greatly help in the fight. Block/deflect his attacks while jumping over his perilous sweeping attack.

This boss has strange timing for his attacks, and it's easy to deflect too early. Be sure to deflect a bit later than usual for max effect. 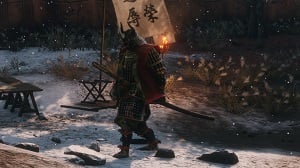 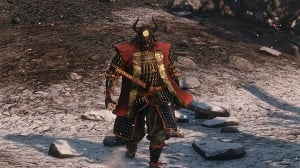 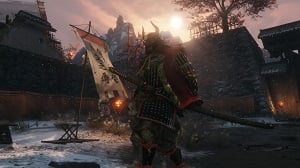 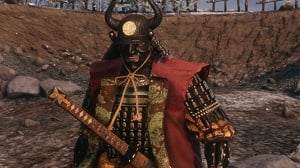 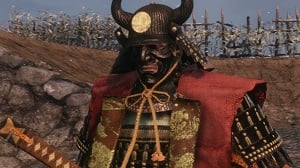 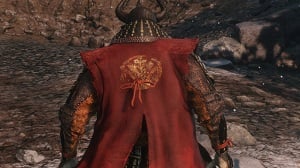