Great Colored Carp (ぬしの色鯉, Nushi no Koi - Guardian Spirit Carp) is a Boss in Sekiro: Shadows Die Twice. Bosses are special Enemies that feature their own arena, a large and prominent health bar, and a variety of unique moves and abilities. You will need to perform multiple Deathblows on them in order to defeat them, and filling their Posture Gauge is the only way to accomplish this. Decreasing their health will make their Posture Gauge deplete slower.

Feeding the Great Colored Carp a Precious Bait will grant 1x Treasure Carp Scale the first time, and 3 the second time, from the feeding attendant. If you feed it too much, the feeding attendant will say he doesn't want the great carp to get fat, and will not reward you with more scales (for an unknown amount of time).

This enemy has a one-shot attack and can only be defeated by completing its quest.

According to the Great White Whisker the Great Carp is biologically immortal, yet the Fountainhead Palace's Lake is filled with Great Carp skeletons, meaning others have killed it before.

Theory: the current Great Carp is a former okami, evidenced by its numerous humanoid teeth. If true however, it's odd that it doesn't have red eyes like the confirmed former okami carps.

Only feed one Precious Bait at a time, then talk to the Noble Father to receive Treasure Carp Scale(s). Feeding more before talking to him, is a waste of Precious Bait items 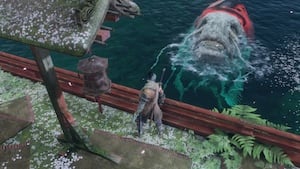