Where to find Long-arm Centipede Giraffe in Sekiro?

What do you get from defeating Long-arm Centipede Giraffe in Sekiro?

This boss is a tutorial on block dancing which is a technique that any player uses to virtually avoid damage from rapid attacking enemies, block dancing is performed by spamming the block button which in turn should cause you to parry all of the Centipede Girrafe's flurry of attacks. He also sometimes starts or end his combo with a sweep attack. Since his sweep is the only other attack he uses, it should be easy to predict. 2 rotations of deflects spams and jumps will trigger the deathblow. Repeat once more to finish him.

Due to the speed of his attacks, there may be a risk of Sekiro's posture breaking during Centipede Giraffe's second or (if he's able to execute one) third barrage. An effective way to recover posture is to dodge away immediately after a barrage ends, then spend some time guarding; Ichimonji is not recommended.

Using Fistful of Ash and Shinobi Firecracker will be able to give you time to get an attack in but it may throw off your timing.

Easy method (Gokan's Sugar)
If encountered early, or if the player has not found many prayer beads to increase their posture, this fight can be hard without good deflection skills. Eating a yellow Gokan's Sugar candy at the start of the fight to increase Wolf's maximum posture makes surviving his flurry of attacks much safer. When he finishes his combo and goes for a perilous attack (always a sweep) simply jump over it and jump again at him to deal posture damage. 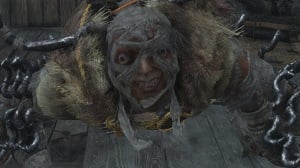 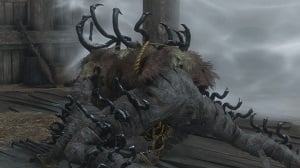 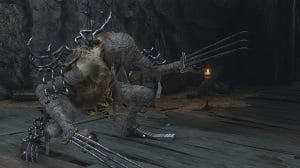 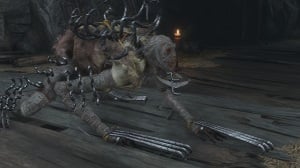