O'Rin of the Water (水生のお凛, Mibu no Orin) is a Mini-Boss in Sekiro: Shadows Die Twice. Mini-Bosses are special Enemies that are uniquely named, and have 2 or more health bars. This means they require at least 2 Deathblows in order to kill, they are generally much more difficult than normal enemies, and they drop some of the best loot in the game.

O'Rin of the Water Location

O'Rin of the Water Rewards

O'Rin of the Water Notes & Tips

O'Rin of the Water Lore

O'Rin of the Water Strategies

Old Deathblow Method: Before triggering her fight, it is possible to knock her from her standing position by jumping on her head (single jump - not double jump/stomp). After doing so, you will be able to perform a deathblow from behind her without needing to deplete her health as if in stealth. NOTE: this is now patched  and you cannot get a free deathblow this way.

New Deathblow Method: Before triggering the fight, one can get behind O'Rin and then throw a ceramic shard, opening her up for a deathblow for about half a second.

Fighting O'Rin traditionally requires either learning her combo timing or having very quick reflexes. She hits hard but after successfully parrying/dodging her full combo she will allow a couple counterstrikes before going ethereal and retreating. As soon as she phase shifts and retreats use that time to heal if needed. Trying to run away to heal can lead to a quick death due to her being able to close in on you from almost any range inside the arena. Once you get good at her timing and pull her health down, she's very easy to stagger with repeated attacks.

Due to O'Rin's unpredictable movement, staying still and focusing on deflections without performing counter-attacks is a viable strategy. She attacks frequently enough that you can deal a deathblow without damaging her health, and when you aren't moving she is much easier to track. The largest damage she takes to her posture is jump kicks off her in response to her Perilous sweep attacks. Consistently landing these will result in her posture failing soon.

O'Rin will easily get poisoned by blue rust. Two full combos will always poison her. Run around while she destroyed by the poison, her attacks are easily dodged while sprinting. Deathblow when she has no vitality left for easy execution.

Slow Walk around the Rock strategy:

You can get O'Rin stuck in a passive slow walk on the stairs just after the wooden bridge. From here you can use Nightjar Slash or the Ichimonji to deal heavy damage safely. Be sure to get her down low enough to drop down and deal the final blow before jumping back up.

Instead of parrying or dodging O'Rin's attacks, one can simply circle O'Rin at a distance (while sprinting). This will prompt O'Rin to close the distance with a short 2-slash combo, after which the player can safely and easily make 1-2 hits before retreating again. Slowly but surely, this strategy can be repeated indefinitely until O'Rin's vitality is depleted.

O'Rin can be lured towards the idol nearby. If she is lured far enough, she will naturally return to her fighting area. In this state, she will not attack, but only block. The fight is made trivial by getting her stuck on a rock to the right side of the valley, near Jinzaemon. She will slowly walk around the rock, but will be pushed back into the corner from the player's attacks. She will block attacks, but some will go through. A two-hit combo is the most that can be done without her blocking, so simply keep doing that. Over time, her health will deplete, and her posture will break, opening up a deathblow. Repeat the strategy for the second health bar for a victory with minimal effort.

O'Rin of the Water Image Gallery 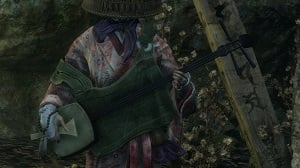 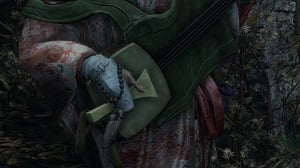 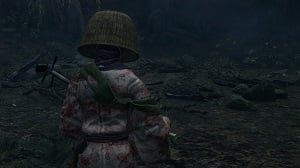 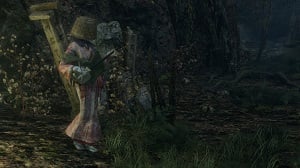 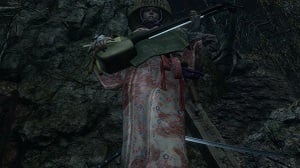 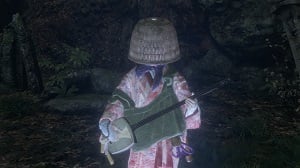 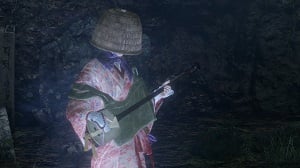 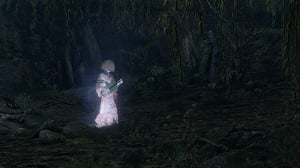 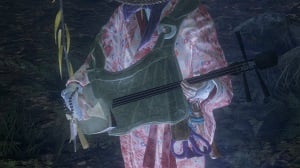 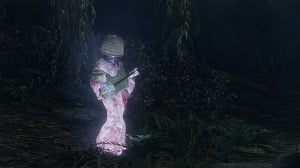