Sakura Bull of the Palace (宮の桜牛, Sakura Bull of the Palace, Miya no Sakuraushi) is a Mini-Boss in Sekiro: Shadows Die Twice. Mini-Bosses are special Enemies that are uniquely named and have 2 or more health bars. This means they require at least 2 Deathblows in order to kill, they are generally much more difficult than normal enemies, and they drop some of the best loot in the game.

Sakura Bull of the Palace Location

Sakura Bull of the Palace Rewards

Sakura Bull of the Palace Strategies

This enemy can be made easier, or even trivial, by using stealth. Rather than approaching him head on you can grapple up to the roof to the left of where the Great Carp breaks the bridge, where there will be 3 Noble Warriors on guard. Alternatively, you can also jump up the broken wall to the right and reach the rooftops this way, which lets you avoid these enemies entirely.
The bull will start to walk around the corner of the small area he starts in as you approach. You can jump down and perform a stealth deathblow from the roof, which will take about a third of the bull's vitality. The rest of the fight is largely similar to the Blazing Bull: you can either stay behind him to avoid his attacks, or attack his head, which deals much more damage.

Be careful not to lure it too far away, as it can de-aggro and return to where it started, recovering to full health in the process.

This boss can be defeated instantly by using firecrackers to startle him while he is unaware. However, there is a bug that causes him to freeze in place when you remain undetected after he has gone into panic mode. To prevent this, deal any damage to him while he is panicking, and he will run into the wall, instantly becoming stunned and vulnerable to a deathblow. 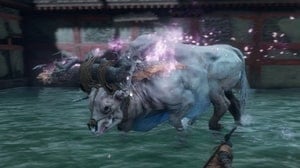