Where to find Snake Eyes Shirahagi in Sekiro?

What do you get from defeating Snake Eyes Shirahagi in Sekiro?

From the Poison Pool Idol, grapple onto the Buddha Hand and then to the edge of the land nearby. Run towards the right enemy and use a death blow on her. Attack the remaining rifle enemy and sneak towards Snake Eyes Shirahagi. Use a sneak death blow on her, wait for her to get up then use double Ichimonji. He will usually follow up with a grab attack do dash back twice and counter attack her. From here players can use Shinobi Firecracker, attack twice and repeat until he is defeated. Staying close will cut down on the chance of her shooting you but will increase his grab attempts. Players can deflect his attacks to damage his posture.

This boss can become quite easy once you use this cheese method, there is a Sculptor Idol at the back of the area that you can use to heal etc. Once you rest there go around and kill all the gunners, there are two by a tent on the left, one on the far right, just past where you came in on a wooden structure, one in the middle (has a cannon) and the boss who is by the fog gate. Leave the boss alone for now and you can even leave the guy in the middle alone, after you kill all the other gunners draw the boss into the poison swamp on your way back to the Sculptor Idol, there is a grapple point above the idol, after grappling jump up the cliff to a small perch area where you are safe from the boss' attacks. Stay there as the boss' health slowly depletes, you can go away and come back if you want but remember to jump down and deliver a deathblow, once you've done this, go back up to your spot and wait again for her health to deplete before finishing her off.

Since Shirahagi has such a high damage output, it's best to minimize your time fighting her by taking away a life-bar doing a sneak deathblow. This can easily be achieved without alerting her to your presence by rushing from the Poison Pool Sculptor's Idol towards her. This idol can be found on the left side of the cavern (entering it from the Ashina Depths Idol entrance) behind a cliff and a Buddha statue. Once you rest at the idol, you can go to the nearest tent with the two minor gunners and take them out. If Snake Eyes Shirahagi sees you, you need to rest and try this step over again. After taking the gunners out at the tent, you can sneak around Snake Eyes Shirahagi (your left side, her right side) and come behind to deliver the sneak deathblow. It is not necessary to use a Gachiin's sugar, but if you're having trouble with the tactic you can try using one.

Use of sugars is additionally recommended to minimize damage taken and maximize damage dealt; although not absolutely necessary. Once you get her down on health, trying to break her posture is easier than downing her health.

Be warned that the other enemies can be alerted to your presence when fighting Shirahagi, and players can only kill the two minor gunners by the tent closest to the Poison Pool Idol before doing the sneak deathblow, since Shirahagi will most likely see you and attack. Her aggro range exceeds the size of the cave so, once she spots you, it's impossible to make her lose track of you unless you rest at an idol. This strategy is especially effective being used right before using the strategy One as seen above.

This is a way to speed up Strategy One. As long as you can target Snake Eyes, wait for her to shoot and then use Phantom Kunai with long press of the attack button. It will do huge damage to her and you should be able to do one life bar without running out of spirit. Use the Ceremonial Tanto to recharge if you didn't use a stealth kill before. This can be done anyway actually and you don't need to cheese her into poison water.

This boss cam easily be beaten by, backing them into the ledge, preferably the one next om the statue to the left. Once the boss against the ledge, they cannot back step away to shot you, be aggressive to slasher when she tries to shot. This will limit her to effectively 2 attacks, her kick and her grab. The kick will be followed up with a shot that can be deflected or dodged. The grab can be handled in the same way. be sure to get right back in her face and attack after dodging away. other than that spam the attack button to chip away at her posture, this strategy is quick and if done right will require minimal healing. 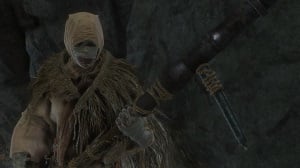 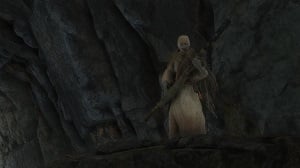 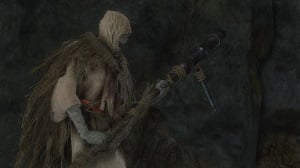 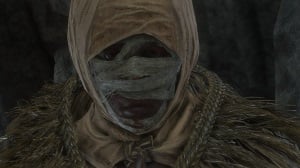