Alpha, Beta & Demo information for Sekiro: Shadows Die Twice. Sekiro had no public alpha or beta stages, and Demos were confined to Game Shows and visits to Activision and FromSoftware offices. Several press outlets and influencers attended these events and produced early gameplay, that reveals certain changes in the game's language toward release.

It is unknown if a demo for Sekiro: Shadows Die Twice may become available after the game's launch.

This rumor proved to be a simple mistake and nothing more.

A possible mistake by Activision Customer Support led to a rumor of a Sekiro Demo happening sometime before release. In a twitter exchange, a user claimed to have pre-ordered the game and asked when the demo would be available, receiving a now-deleted response saying "codes will be sent out soon" 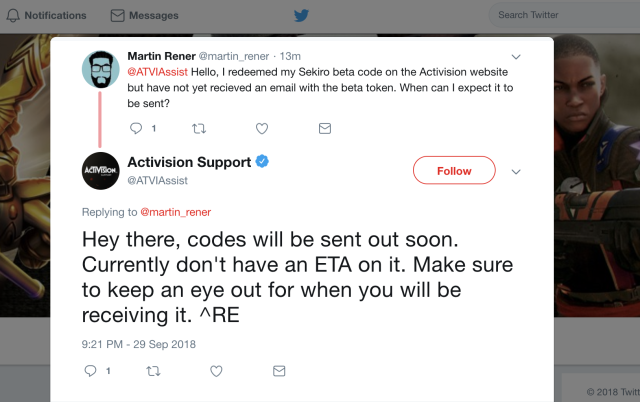