Stats in Sekiro: Shadows Die Twice are a bit different than other From Software titles, and they can be a bit confusing at first glance. The main stats of Sekiro can be seen whenever he sits at any Sculptor's Idol. However, Posture values cannot be seen, though it does increase through out the game.

Attack Power is how much Vitality damage and "Posture" damage the player deals when attacking with Kusabimaru.

The player can permanently increase Sekiro's Attack Power by "facing the memories" of slain bosses at Sculptor's Idols.

This determines the total damage Sekiro takes before he dies. This can be restored using Items, Latent Skills (such as Breath of Life: Light) and by resting at Sculptor's Idols.

Posture determines how many attacks you can block, deflect or hits you can take before you are exhausted and exposed to attacks. When you completely fill an enemy's Posture you can perform a Deathblow, and when your Posture is completely full you cannot move or block/deflect for a few moments.

Much like with Vitality, the player can permanently increase Sekiro's Posture by using Prayer Beads at Sculptor's Idols.

Prayer Beads drop from mini-bosses, are found through the world and can be bought from some merchants.

Memories drop from major bosses upon defeat, and their descriptions shed more light on the lore of the game, akin to the Soulsborne' item descriptions. Additionally, by collecting all the pieces of the Dancing Dragon Mask, the player can increase the Attack Power indefinitely, at the cost of skill points.

Resurrection is the ability of the player to choose to resurrect on the spot if they die, rather than restarting from the last checkpoint. The amount of times the player can resurrect is marked by nodes located above Sekiro's Vitality bar.

This ability is only available once per checkpoint unless the player recharges the ability by killing enemies and performing Deathblows. Charges can also be regained by consuming specific items.

Unseen Aid prevents the player from losing XP and Sen upon dying. You have a percentage chance of this happening, which can change based on certain actions in the game. The more Dragonrot you incur, the less likely it is you will receive Unseen Aid.

Spirit Emblems are items used to fuel Prosthetic Tools, advanced Combat Arts, Ninjutsu Techniques and Spiritfall buffs. They can be bought directly at Sculptor's Idols, and are also found through the world and can drop from fallen enemies.

Sen is the gold currency of the game, used to purchase Spirit Emblems, items from merchants, and for upgrading Prosthetic Tools. Sen is scattered throughout the environment (in the form of coin pouches) and can be also looted from killed enemies.

Drop Rate is a hidden game mechanic which determines the frequency and quantity of items dropped by enemies.

There are several ways to increase the drop rate of items and/or Sen. Quick use items... 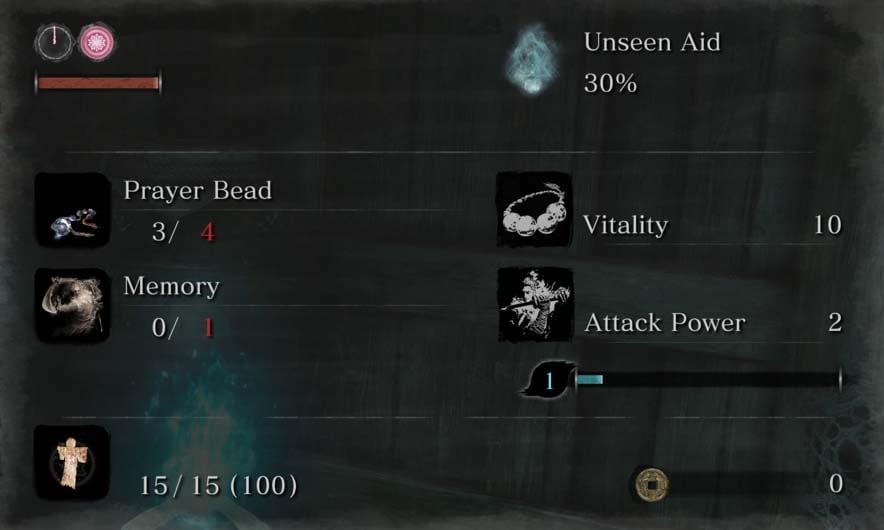