Dragonrot（竜咳，Dragon Cough） in Sekiro: Shadows Die Twice affects the NPCs by making them sick, which prevents progression of their Quests. In addition, the more Dragonrot you accumulate, the less Unseen Aid you will have. Each time you die and respawn at a Sculptor's Idol, the player has a chance to receive a Rot Essence item, which means the NPC associated with that Rot Essence now has Dragonrot.

Note: Using Resurrection to revive yourself in battle does NOT cause Dragonrot to spread. Only dying and then respawning at a Sculptor's Idol causes a chance of NPCs contracting the sickness. 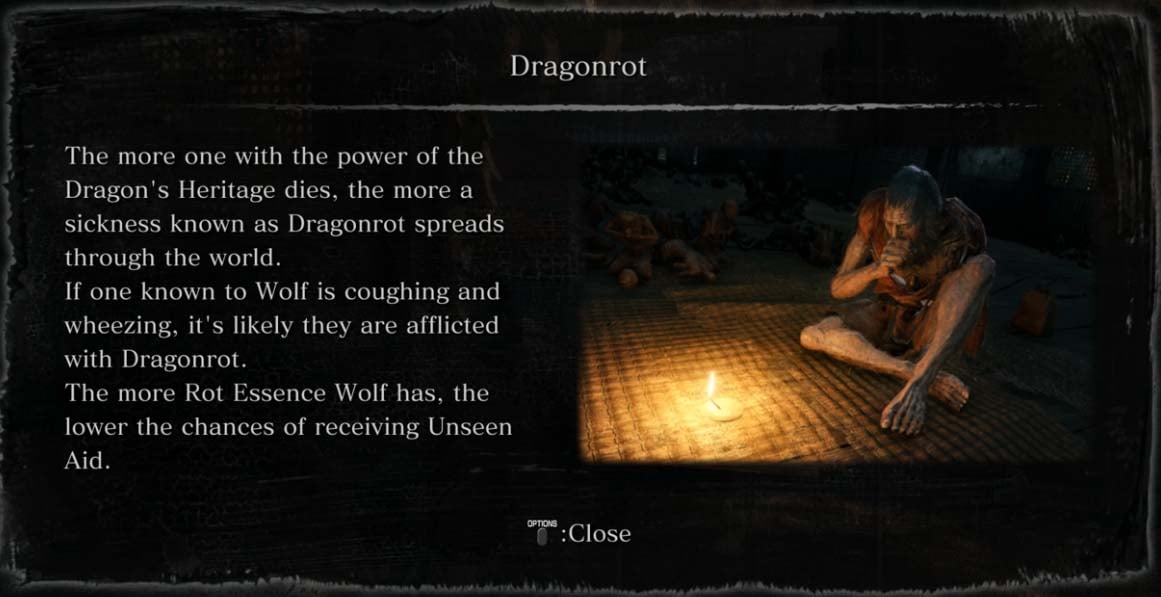 
Dragonrot is a disease that affects NPCs based on how often the player has died. The player receives an item called Rot Essence (which indicate which NPC has been infected) automatically after a certain amount of deaths.

Dragonrot Restoration: the Recovery Charm key item allows Dragonrot sufferers to be healed from a Sculptor's Idol by consuming a Dragon's Blood Droplet at any Idol to heal Dragonrot from ALL of those afflicted. Doing so will not only heal all NPCs, but also cause all Rot Essence to disappear from your inventory, and subsequently restore the chance of receiving Unseen Aid to the default value (30%).

How to get the Recovery Charm:

Progressing Emma's questline will reveal the reason of Dragonrot. Sekiro's Resurrection power comes from his relationship to the Divine Heir, but his blood is stagnating. The life force to resurrect is thus being stolen from others to make up for it.

The process of losing one's life force is seen as the effects of Dragonrot.

Rot Essence are special Key Items in Sekiro: Shadows Die Twice that are acquired after Sekiro's death and respawn at a Sculptor's Idol. The chances for acquiring Rot Essence are not specified in-game.

Each Rot Essence is an item that tells you who is afflicted with Dragonrot - NPCs inflicted with Dragonrot may be unavailable to interact with normally, stalling their story progression until the Dragonrot is cured by using a Dragon's Blood Droplet at a Sculptor's Idol (one droplet cures all NPCs). Additionally, the more Rot Essence Sekiro has, the lower the chances of receiving Unseen Aid which prevents losses upon death.