Sekiro (隻狼), commonly known as "Wolf" (狼, Ōkami), is the protagonist of Sekiro: Shadows Die Twice. Unlike in other FromSoftware titles such as Dark Souls and Bloodborne, players cannot customize the player character as freely, being instead set on a course to experience Sengoku Japan as the "One-Armed Wolf" shinobi, Sekiro.

A shinobi who serves Kuro, the Divine Heir. He is highly skilled, with many combat arts and abilities at his disposal, and mastery of blocking, deflecting and attacking. Along with excellent vision and hearing, he is able to sneak around and perform effective Deathblows on Enemies. At the start of this story, he is defeated by Ashina’s commander, Genichiro, losing both the Divine Heir and  his left arm, which is later replaced by the Shinobi Prosthetic. “The Lord is absolute, protect with your life” is the principle by which shinobi live. The law demands rescue, and vengeance.

See the Story & Lore page for contextual information on the Sengoku period and the overall story of the game.

The player can slice, thrust and stab to attack enemies; and block, deflect, counter and dodge enemy attacks with Sekiro's basic moves, but obtaining valuable skills, techniques, and equipment are key options to obtain victory in battle.

See the Combat page to understand the main combat mechanics of the game.

Narrator: In the closing years of the Sengoku Era, Japan was consumed by perpetual conflict.
Character 1 (War times): What's the matter, stray? Nothing left to lose?. Well, would you look at that. Will you join me, starving wolf?
Character 1 (years later): That day I pulled you from the battlefield, I had no idea what you would become 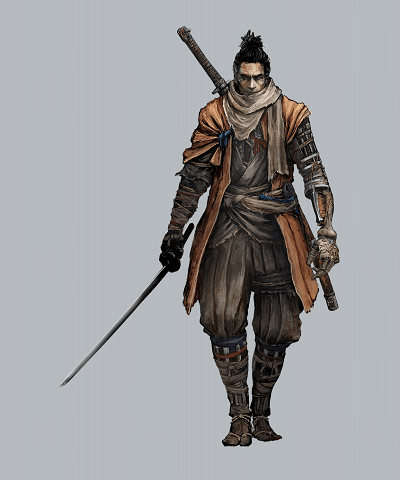