NPCs and Characters in Sekiro: Shadows Die Twice are the various people that you find throughout your journey. These Characters and NPCs may trade with you, give you Quests and Side Quests, or share parts of the Story and Lore for you to piece together.

FromSoftware has revealed that players can expect to see NPC questlines similar to those found in the Souls series, which would mean NPCs provide optional objectives that can be failed and alter the NPC spawn locations, their attitude towards the player character, and their own story progression. Some NPCs found in the world will later move to the the Dilapidated Temple hub, and talking to them can progress their quests. It is not yet known if NPC quests will have an impact on the game's multiple Endings.

A shinobi who serves the prince. Calm and quiet as the law commands, but also capable of great brutality to achieve missions. Just like the wolf never embraces and just kills, so would an excellent shinobi. At the start of this story, they find themselves beaten by Ashina’s commander, losing both prince and left arm, which is replaced by a shinobi arm prosthetic. “The Lord is absolute, protect with your life” is the principle by which shinobi live. The law demands rescue, and vengeance. See Equipment for available gear and Skills and Skill Trees for Character Progression.

The only surviving descendant of an ancient clan. The Prince was raised in seclusion as a Shinobi, and adoptive son of Ashina’s minister Hirata. He appears calm and strong-willed beyond his years, with a dignified appearance and gentle demeanor. He was captured by the Ashina clan due to his unique ancestry.

The Sculptor, or Busshi of Aredera as he is referred to by promotional material, is the exiled sculptor of the Dilapidated Temple. He is a taciturn, ill-mannered old man who spends his days living as a hermit inside a dilapidated temple located deep within the mountains near Ashina Castle. For reasons unknown, he chooses to assist Sekiro on his quest by fitting him with a Shinobi Prosthetic after the Wolf lost his arm. When not directly aiding Sekiro by offering to add new Tools of Upgrades to his arm, he spends most of his time carving warped, furious-looking statues of the Buddha.

A former student of the renowned physician Dogen, Emma is a healer that can be found at the Dilapidated Temple. She will assist Sekiro by improving his Healing Gourd in exchange for Gourd Seeds. 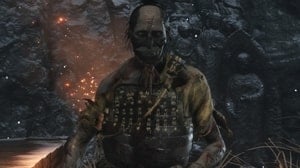 Hanbei The Undying is an unkillable NPC who will assist Sekiro in combat training, acting as a "combat dummy" for the player to test acquired skills and moves. Though undying—or, rather: infested as he puts it—his one and only wish is to find peace... which you may be able to grant, should you choose.

A peaceful, child-like monk suffering from a terrible headache. He is searching for a pure white flower. 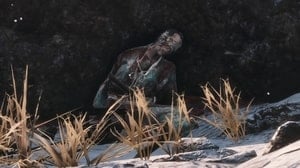 A dying warrior of the Ashina Clan who barely survived an encounter with Lady Butterfly. He now lives only to care for his sickly mother.

A senile old woman, burdened by the bell she holds onto and the disappearance of her son. 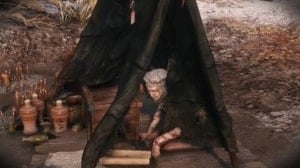 A merchant found near a battlefield; his group sell their wares as offerings for the dead. 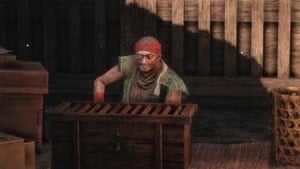 Sitting under a large gate, this former-thief will remind you of past events, in exchange for funding his business. 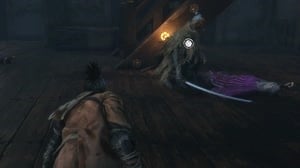 A powerful warrior who wears a mask and armor stylized after the Tengu of Japanese folklore. When first encountered, he is busily dispatching the "Rats" which have infiltrated Ashina Castle. 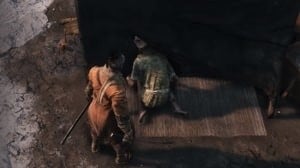 A merchant with a fondness for crows; his group make sell their wares as offerings to the dead.

A noble warrior who stood with the Ashina Clan, and is dedicated to protecting his young lord no matter the cost. 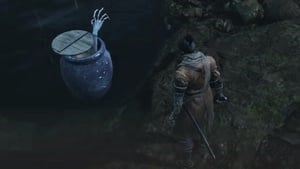 A mysterious merchant who lives inside a pot. He will exchange special items for rare, treasured scales. 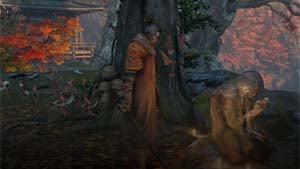 A mysterious "Old Hag" found in several different areas of the game. She will trade you valuable information for offerings of Rice. 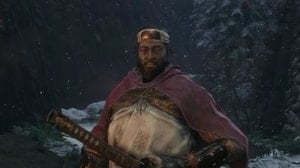 A warrior dedicated to protecting and patrolling the moat around Ashina Castle. He is enchanted by a song only he can hear. 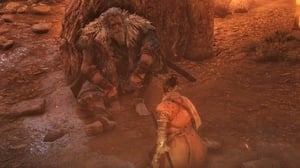 A master shinobi who adopted and mentored Sekiro after the war. His entire life revolves around upholding the Iron Code and protecting Kuro. 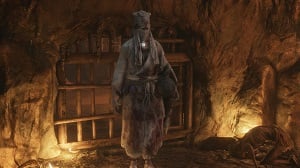 A former disciple of Dogen who is found in the Abandoned Dungeon. He is covered from head-to-toe in bloodstained white robes, and requests Sekiro to help him find willing subjects for his new master, the mysterious physician Dosaku. 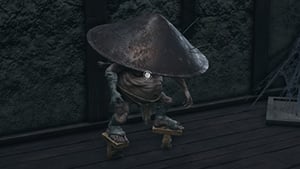 A fugitive "Rat" that acts as a merchant within Ashina Castle. He is searching for something, and has business within the castle. 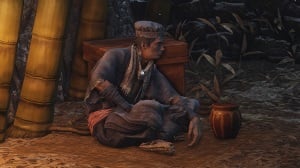 A merchant and information broker hiding in Ashina Castle. 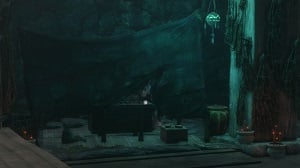 A merchant just outside the Abandoned Dungeon entrance. 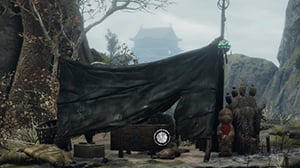 A merchant located by going left and down from the Shugendo Idol in Senpou Temple, Mt. Kongo. 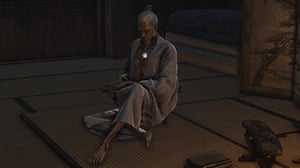 The frail, aging lord of Ashina, who has been secreted away inside a guard tower within the castle for quite some time. 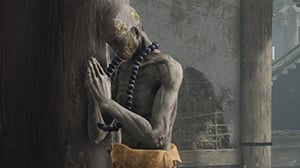 A Monk who found his way to the Halls of Illusion, and decided to stay. 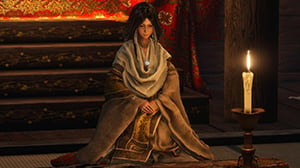 One of several dozen children experimented on with the False Waters of Life. 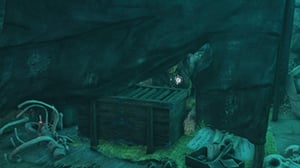 A sickly merchant located by going to the depths of the Sunken Valley, where the poison swamps are located. 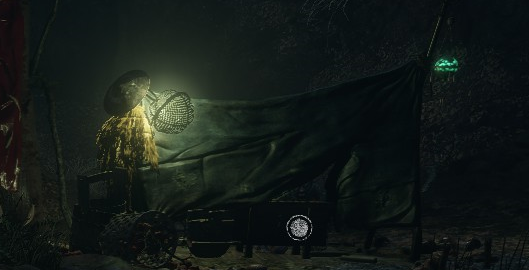 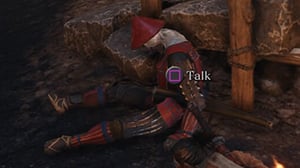 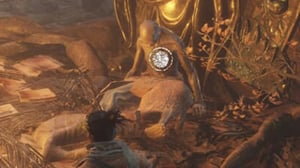 An old, dying Buddhist found on the outskirts of Mibu Village, in the Hidden Forest. 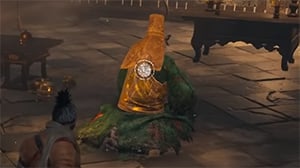 The immortal master of the Senpou Sect. Unlike his compatriots, he seemingly regrets all the Sect has done in their mad quest for immortality. 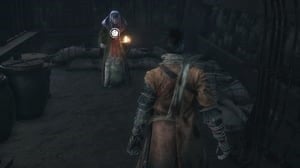 A mysterious old priestess found in Ashina after Tengu has moved from his original spot. 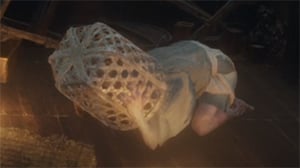 A jittery, frightened member of Mibu Village who has somehow managed to escape the effects of its tainted waters. He wears a straw-woven basket on his head, and provides information on Mibu Village and its occupants. 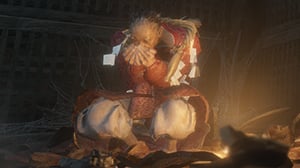 A man more obsessed with slaking his thirst than answering the prayers of his people, he spends his days locked away inside the village temple while muttering to himself about water and sake. 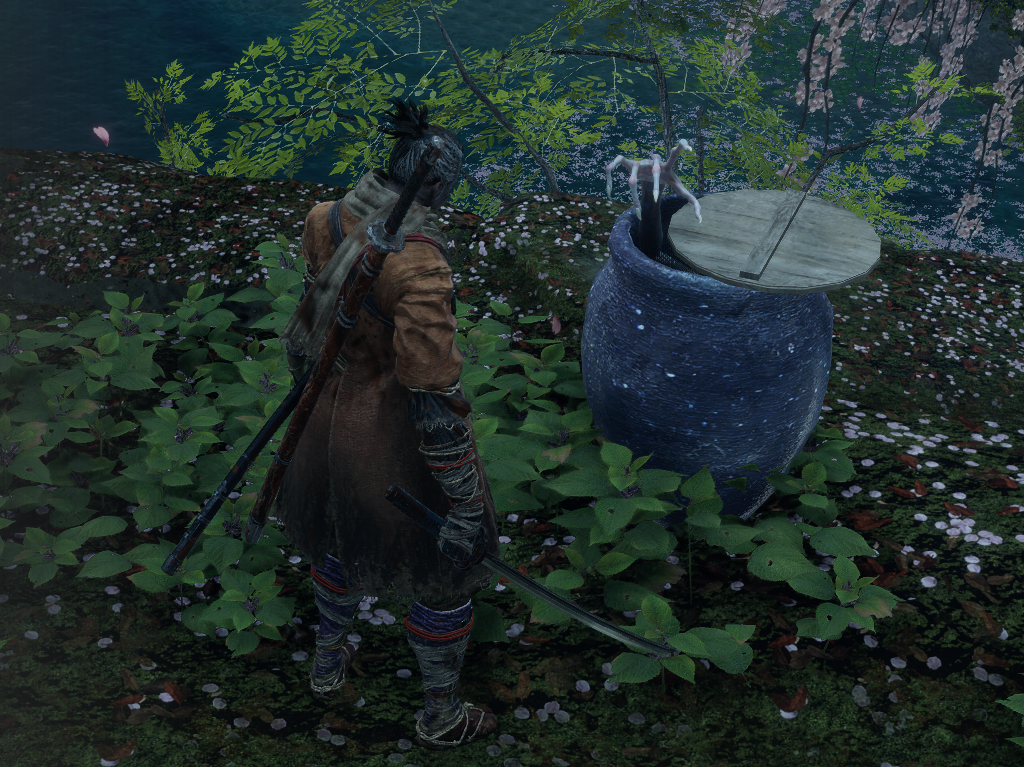 Another mysterious merchant who lives inside a pot. He will exchange special items for rare, treasured scales.

Daughters of the Carp Attendant 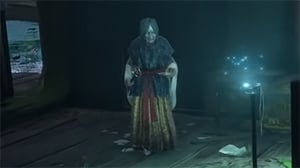 A pair of twins found in the Fountainhead Palace. They are equal parts lamenting, and suspicious of, what they believe the Palace Nobles are doing to their father. 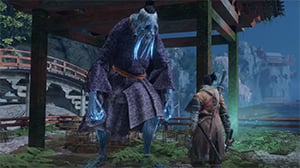 A man found in the Fountainhead Palace. His sole occupation seems to be taking care of and feeding the Great Carp found in the waters of the Palace.