Shichimen Warrior (七面武者, Warrior With Seven Faces) is a Mini-Boss in Sekiro: Shadows Die Twice. Mini-Bosses are special Enemies that are uniquely named, and have usually 2 or more health bars. This means they require at least 2 Deathblows in order to kill, they are generally much more difficult than normal enemies, and they drop some of the best loot in the game.

Attention: buying the Anti-Air Deathblow Text from Blackhat Badger will trivialize fights against these mini-bosses, as they allow you to Deathblow them in mid-air regardless of their Posture. However, this deathblow can only be performed if divine confetti is active.

Just like the Headless fight, you'll need at least 2-3 Divine Confetti in order to beat this boss. The fight is pretty straightforward, be as aggressive as possible. When he deflects one of your attacks, he will turn invisible and move backward, DO NOT FOLLOW HIM. You will die if you do. He will reappear again somewhere in the area so keep on circling around until you find him, After reappearing he will shoot a beam on you, to counter this simply deflect the beam, run in again, attack, until he disappears again. Rinse and repeat. If you do this properly he won't be able to do his other attacks. In the off chance where you ran out of Divine Confetti while fighting him, you can still beat it using Prosthetic Tools.

Start the fight by using Divine Confetti and if you like an Ako's Sugar. Jump down the hole and sprint to the boss coming in at an angle to avoid the terror orbs that spawns directly in front of the Shichimen Warrior. Attack the boss several times, backing away once your terror bar is about halfway or so. Depending on your attack power, players may be able to break his terror ring and continue attacking him until he attacks back. Once he teleports he will throw small skulls that will somewhat track; avoid them by running to the side of them. Blocking them will increase your terror bar. If he shoots his terror laser at you pick a direction and continue running at the side to avoid this. Players can deflect this attack also negating the terror buildup; however, if its mistimed you will take chip damage and normal terror buildup. When he uses his large terror ball and triple terror ball, run away from him at an angle.

Alternative Strategy: Later in the game, you can get the Shinobi Tool upgrade Phoenix's Lilac Umbrella. This tool makes the mini-boss very easy for two reasons: 1) the Lilac Umbrella can block all of the Terror orbs, as well as the beam (even while moving); and 2) if you have the skill Projected Force, you can then strike the boss for heavy damage while using the Umbrella which will stun them for several normal attacks. Additionally, landing the Projected Force attack while the Shichimen Warrior is in midair will fill his stagger gauge instantly, leaving him vulnerable to a deathblow. While Divine Confetti is unnecessary with this Shinobi Tool upgrade, but still helps a lot. 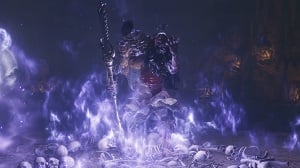 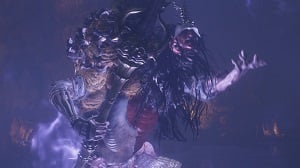 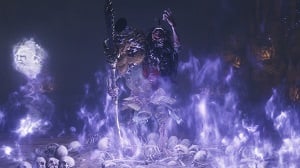 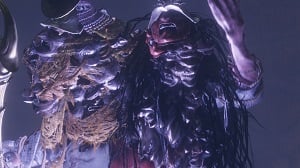