Blazing Bull (火牛, Fire Ox) is a Mini-Boss in Sekiro: Shadows Die Twice. This Complete Blazing Bull Mini-Boss Guide gives you strategies on how to beat the Blazing Bull easily, as well as tips, tricks and lore notes. Mini-Bosses are special Enemies that are unique, and have 1 or more health bars. This means they require at least 1 Deathblows in order to kill, they are generally much more difficult than normal enemies, and they drop some of the best loot in the game.

Where to find Blazing Bull in Sekiro?

What do you get from defeating Blazing Bull in Sekiro?

The strategy for this fight is to try to stay behind him and bait him into swiping at his side, dodging to stay behind him and then attacking. Every 10-15 seconds he will sort of go berserk and this is a good time to use the Shinobi Firecracker to stun him and get in some attacks. Now attack him from behind once again, repeating this process as necessary.

An alternate strategy is to bait the charge and deflect. This will briefly stun the bull, allowing the player to get in three  attacks on its head then quickly reposition and back up in order to bait another charge. It may take some practice to get the timing of the deflect down, a beat or two after the bull lowers its head. As the head is the bull's weak spot, this strategy can be used to defeat the beast quite quickly. The player will still take a small amount of damage from the charge and will build up the burning status effect when deflecting. But, this will be minimal on a successful deflect. However, the player should monitor these and heal as needed. It is advisable to lure the bull into destroying all the structures in the area so that the player has a clear view of the arena and does not get caught unexpectedly on any obstruction.

Jump attacks tend to be quite safe against this boss's charge attacks and allow safe repositioning but do limited damage.

Proper positioning (player should be on left side with the enemies between them and the upper right corner where the bull spawns) at the beginning of the fight will cause the bull to kill the two normal enemies as it enters the area, slightly simplifying the fight.

Eavesdropping on nearby warriors indicates that the Blazing Bull attacks friend and foe alike.

The bull takes reduced damage when struck anywhere but the head, the hardest place to strike the Bull safely.

If you die to the two enemies that come to check on the Bull after the fight ends, you will spawn at the Ashina Castle Idol regardless of whether or not you have unlocked it, and you will be unable to return to the boss arena.

If the bull crashes into the wall of the arena during its charge attack, it will be stunned for several seconds. During that time, it's vulnerable to a deathblow.

The Blazing Bull was probably to some degree inspired by the Minamoto army's use of charging bulls with torches affixed to their horns as a shock tactic against the Taira army during the Battle of Kurikara Pass in 1183. Before that, the Chinese warlord Tian Dan used nearly the same technique against a castle which refused to surrender during the Warring States era, however in his case the torches were tied to the bulls' tails. 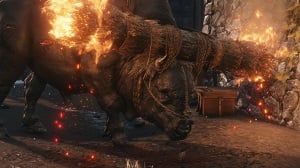 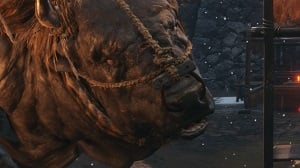 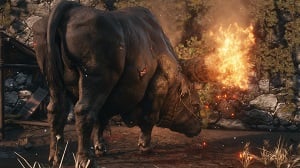 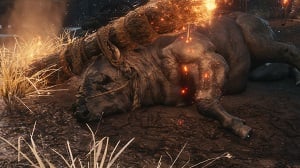