Headless (首無し, Kubinashi) is a Mini-Boss in Sekiro: Shadows Die Twice. Mini-Bosses are special Enemies that are uniquely named, and have 2 or more health bars. This means they require at least 2 Deathblows in order to kill, they are generally much more difficult than normal enemies, and they drop some of the best loot in the game.

The Headless are large, pale-bodied apparitions with no head, from which they get their namesake, wearing only a fundoshi. They wield a large glowing purple blade which they use to attack.

The Headless are highly resistant to normal blades; the most efficient way to kill a Headless is by using a Divine Confetti which will allow your blade to harm them for a significant amount of damage. The Headless surround themselves with a black mist that stops those near them from sprinting or dashing, this can be dispelled by attacking them consecutively and dealing enough damage with a Divine Confetti empowered blade. Their attacks and abilities inflict the Terror  status.

For this fight, you'll need Divine Confetti to deal considerable damage to this mini-boss. To start the fight, you'll want to jump and land as near as possible to the him to begin dealing early damage while he's "waking up". Attack him as fast as you can because the Headless won't be attacking in the first few seconds (even though it looks like it's winding for an attack). During the fight, the Headless will cast a mist around him that will slow your movement. To negate the effect, continuously land blows and that will disperse the mist surrounding him. Headless also has an attack where he becomes invisible, only to reappear behind you and perform a grab attack. When this attack commences, quickly turn around and start swinging. Your successful hits will pull him out of the invisibility cloak. His attacks are slower than average and easily deflected, but he also launches sweep attacks, so be ready...

Fighting the Ashina Outskirts' Headless is best reach through from the Demon Bell Idol located in Senpou Temple, Mt. Kongo. Right before starting the fight buff yourself with the following: Divine Confetti to deal damage, Pacifying Agent to resist and remove terror, Pellet to minimize health damage, and an Ako's Sugar to deal extra attack damage and posture damage. The reason for the Pellet is coming from this specific way may cause the Headless to attack early although it seems to be uncommon. Alternatively, popping the Pellet create a small buffer window where if your deflect wasn't perfect it will recover your last health. Jump into the center of the arena staying close to the direction you came in so you can quickly lock-on the boss and attack. You can get about 4 attacks in before you need to start deflecting. Most of his attacks are slow that you can chain deflect into attack and repeat until his posture is broken. Deathblow him and pop another Pacifying Agent to remove your terror bar. Repeat once more until he is defeated. The headless may teleport in which case he will almost definitely be right behind you so attack the air behind you to get some early hits in. The Headless likes to chain his teleport into a grab so jump away of dash. The mist he creates will slow you down so it helps to be aggressive to negate the mist altogether. Even attack power 4, this boss shouldn't take too long. -

First, to execute the cheese we need to understand a bit about the way the Headless act. Here are somethings to remember:

All that is needed to execute this cheese understanding 1 and 2. By getting right behind the headless, you can control his movements to perfection with room for error. Whenever the Headless turns he gives a small pause which is enough time for a single attack. Simply attack and then rotate with the Headless. Since you are behind the headless he will never start an attack. To keep this up you will need to hold down the sprint button consistently due to the slowing mist. The only hard part about this is determining to which direction the Headless will turn on his rotate. It will always be towards the player, but it can be a bit hard to determine when you are right behind him. If you are not behind Headless when his rotation ends, he will begin an attack.

The challenge is getting behind the Headless consistently. 3 and 4 help with this. The teleport can be baited by standing just outside the mists range. The telegraph is very apparently once you realize it requires a series of very specific melee swipes to occur. Once Headless teleports he will attempt to do his grab attack, if you are moving forward when he teleport he will always miss and continue to try to grab for several seconds. During these second you can run to the left of Headless (his right) with ease and get behind him and start the cheese.

The teleport is the safest way to begin the cheese strat, but if you can get behind headless during any attack you can start the cheese. Once his attack finishes he will be 100% predictable as long as you are behind him. I found the vertical swipes to be the second easiest. Just make sure you don't get to far to have the headless start range attacks. Maintaining the cheese will take bit of practice to keep it consistent which you may need to do for the harder headless (The one in hidden forest took me about 20 minutes at 4 sets of beads and 2 memory upgrades).

TL;DR: Stay in the 180 degree arc behind Headless and do a single attack, then move, to ensure you are always behind him. This strategy was posted by u/treemakesagame to r/Sekiro on March 24th, 2019. This guide has not been edited other than for formatting, spelling changes and readability for the Sekiro Wiki.

For this strategy, simply use the Mottled Purple Gourd before the fight starts. No additional consumables (other than perhaps a healing gourd) are required (On the Headless with an extra apparition, kill the apparition first. Do not relent, do not move away from his melee and kill him asap even if it kills you provided you have a Resurrection).

The trick is to never leave melee, ever. Be on the offensive, always. The moment it looks like he's channeling anything or about to do a big swing (be it the Perilous Attack or anything that remotely looks like any kind of channel or cast), dash-swim through it so you end up behind him. While he's channeling his stuff, you can calmly swim back and hit him in the back (or use the time to heal). Mottled Purple Gourd will ensure you cannot die of Terror even if you make a mistake and get hit. Rinse and repeat. 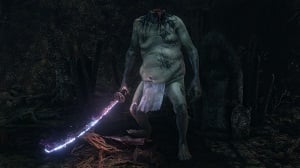 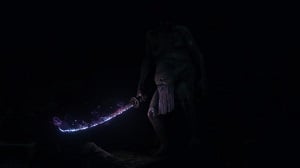 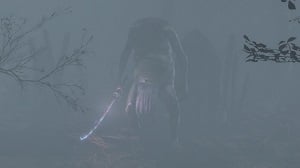 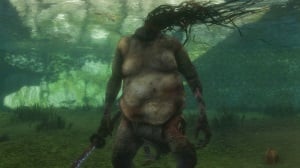 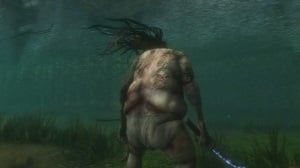 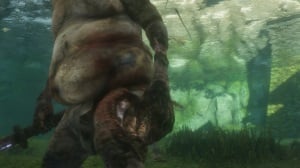 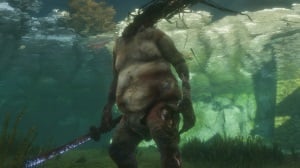 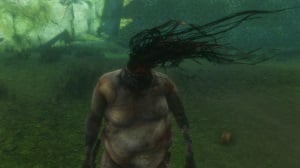