Guardian Ape (獅子猿, Lion Monkey, Shishizaru) is a required Boss in Sekiro: Shadows Die Twice. This Complete Guardian Ape Boss Guide gives you strategies on how to beat the Guardian Ape easily, as well as tips, tricks and lore notes. Bosses like the Guardian Ape are special, dangerous Enemies that feature a special display on-screen when defeated, such as "Shinobi Execution" (or other message, in certain circumstances). You will need to perform multiple Deathblows on them in order to defeat them, and filling their Posture Gauge is one way to accomplish this, as well as depleting their health. Decreasing their health will also make it so their Posture Gauge refills more slowly, assisting you in accomplishing this feat.

The Guardian Ape is an immortal being that guards the Lotus of the Palace. It has white fur with a red scar running vertical from the top of its head to its left cheek through its left eye. The Ape has large, sharp claws on its hands and feet. There is no fur covering Ape's buttocks. Noticeably, there is a large nodachi-style weapon running through the neck of the beast.

The Guardian Ape has two (2) health bar that must removed in order to kill this boss. During the first phase of  the fight you will be dealing with a beast-type enemy that roams around the arena on all fours. You can easily stun the beast using the Shinobi Firecracker. Dealing the first deathblow to this enemy will decapitate it using the large blade through its neck. As an immortal being the ape will now resurrect and fight you with the sword used to decapitate it in its right hand, and its severed, still living head in its left. The ape is no longer a beast-type enemy and has become an apparition-type enemy. The Guardian Ape (headless) is not affected by the Shinobi Firecracker, but will now take additional damage from Divine Confetti, the Mortal Blade, and--in specific instances--the Loaded Spear. The Loaded Umbrella can be used to block the terror status from the blood scream which allows you to capitalize on this opening.

Where to find the Guardian Ape in Sekiro?

What do you get from defeating the Guardian Ape in Sekiro?

Pro-Tip: As for most bosses, Shinobi Firecrackers are a good option to disrupt the boss allowing you to get hits in. Mortal Draw is also a good option while the boss is stunned due to it's high damage and how long it takes Guardian Ape to get back up.

The key to this phase is to stay close to the Guardian Ape, and bait it into attacking. The vast majority of its attacks can be blocked, so defend and wait for its combos to finish before attacking. While this is not overly hard, reading the combos can be a bit tricky at first.

Be wary to its body slam attack, where it jumps on its back and proceeds to thrash the ground. When it does that, try to stay away from its arms and hit his head.

Another vicious attack is a poisonous poo, which when thrown inflicts massive damage and instant poison status. However, this attack is very telegraphed as it jumps high before throwing the feces; simply run below as it jumps and retaliate, as its recovery from this attack is quite lengthy. Additionally, it also has a fart attack which is often used when Sekiro is behind it; while this doesn't inflict instant poison, it fills the poison status bar considerably.

Occasionally, the Guardian Ape will jump back and unleash a roar. A prompt to use the Grappling Hook will appear, allowing Sekiro to close the gap and causes a brief stagger.

Finally, being a beast-type, the Guardian Ape is very susceptible to the Shinobi Firecracker, which can be used to briefly stun it. The Flame Vent is also very effective, inflicting flame status and having a chance to knock it down.

In this phase, its attacks are much easier to deflect and will inflict more posture damage compared to the previous phase, so try to deflect as much as possible. However, it is advised to stay far from the Guardian Ape as its attacks have higher range. Only move in close to deflect attacks when its health is low, so that you can build up Posture.

Be mindful of its sword swipes that cover a wide area. Don't stay on top of it attacking for too long. Attack it a few times after its combos and back away.

The Guardian Ape has a very telegraphed attack where it lunges forward with a swipe while falling on the ground, leaving it very vulnerable. To capitalize on this, jump over as it dives and strike it in the air, following with a full combo.

Another attack that can be exploited is its large overhead attack, that be deflected; this has quite a large window of opportunity, and once deflected it will inflict massive stagger, allowing for a quick flurry of hits before the Guardian Ape recovers. Also, when it is down, using the Loaded Spear and directly attacking its neck will allow to pull out a centipede and do massive posture damage.

Its most dangerous attack is a battle roar, which unleashes shockwaves that fill up the terror meter, meaning it can inflict Terror status, which instantly kills Sekiro. Despite being focused on terror build-up, the Phoenix's Lilac Umbrella isn't required, any Loaded Umbrella type prosthetic will completely negate the scream. In New Game+ only Phoenix's Lilac Umbrella can still be useful with Projected Force, as the slash will temporarily be buffed with a Divine Confetti effect. Note that this buff will override and cancel any other buffs on your sword, such as actual Divine Confetti or Living Force.

Since in this phase the Guardian Ape changes from a beast-type to an apparition-type, the Shinobi Firecracker does not affect it. The Flame Vent is still is effective, inflicting flame status, but it doesn't knock it down.

A long but safe strategy is to constantly hold down the run button, and kite the ape around the arena. When the ape dives, leap over the ape and swing three times. As soon as you hit the ground, start running from the ape again. 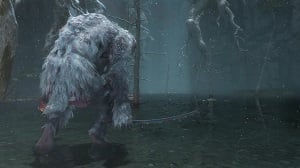