Whirlwind Slash is a skill in Sekiro: Shadows Die Twice, this type of skill is a Combat Arts Skill that is under the Shinobi Arts Skill Tree. Each Skill Tree consists of a variety of skills that are categorized as Combat Arts, Shinobi Martial Arts, and Latent Skills that will allow players to alter and customize Sekiro's overall effectiveness in combat and survivability.

These skills can be unlocked by spending gained Skill Points at a Sculptor's Idol.

A spinning attack that can hit several enemies at once. The sharp cut combined with the force of the spin can strike multiple foes, and deal damage even when guarded.

When surrounded by enemies, this shinobi technique can cut open a path to victory.

How to Acquire Whirlwind Slash 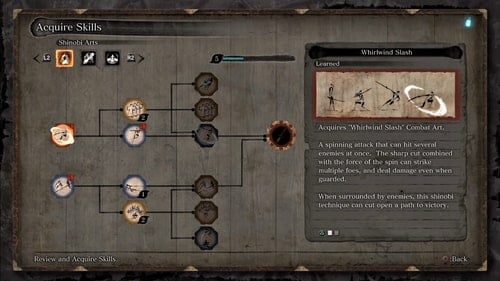