Vault Over is a skill in Sekiro: Shadows Die Twice, this type of skill is a Shinobi Martial Arts Skill that is under the Shinobi Arts Skill Tree. Each Skill Tree consists of a variety of skills that are categorized as Combat Arts, Shinobi Martial Arts, and Latent Skills that will allow players to alter and customize Sekiro's overall effectiveness in combat and survivability.

These skills can be unlocked by spending gained Skill Points at a Sculptor's Idol.

A Shinobi Martial Art that allows one to leap over and behind a Posture-broken enemy.

This Martial Arts technique allows the use of backstab Deathblows in the middle of a battle, even without using Stealth.

How to Acquire Vault Over 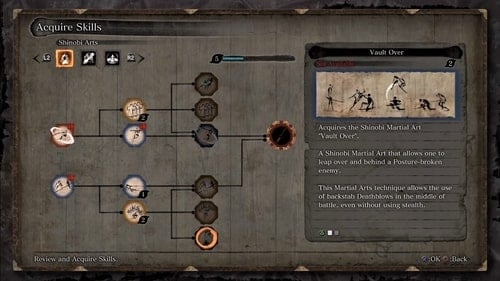