Mikiri Counter(見切り, See Through/Anticipate) is a purchasable skill in Sekiro: Shadows Die Twice and can be found under the Shinobi Arts Skill Tree. It is a powerful counter to enemy Thrust attacks that deals significant Posture damage to the enemy.

Enables one to counter an enemy's thrust attack by stomping down on an enemy's weapon, dealing a large amount of damage to Posture.

It is nearly impossible to perceive the speed of a thrust, but not for sharp eyes of a Shinobi.

How to Acquire Mikiri Counter 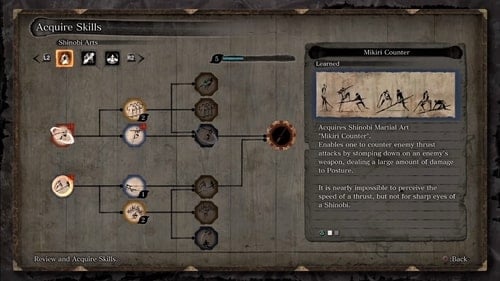